History is always something that has fascinated me. Firstly we can learn lessons from it, if we take the time to look at it, and it explains a lot of weird things like why are coffee futures are controlled by countries that do not even grow coffee.

What the hell are they? Futures are instruments that attempt to predict the supply quantities of a product. As we know supply and demand determine the price of an item in a truly open market. If there is an oversupply for the demand then the price goes down, and under supply the price goes up. So futures look at the prevailing conditions to try and predict the output or eventual supply. For coffee this works in roughly 3 month prediction cycles.

The coffee market in the 1800's was controlled by the Dutch and German's, they sorted and distributed coffee to the rest of the world. Hanover is still the largest exporter of coffee. In fact even though Brazil was the largest producer of coffee (all varieties), it first went to either Amsterdam, or Hanover to be sized and graded and then got distributed to the rest of the world.

With Europe entering into a little skirmish in 1914, that became a world war, America was starved of coffee. Even though at that point they were a small consumer (only around 30 million bags), they decided to go straight the the Brazilian source, and specifically the well established port of Santos. With this came the development of the NY futures market. The NY Stock exchange had no reference point so they setup their own futures market, initially only for the USA, but with the destruction of the Dutch and Germans economies as a result of WWI. Add to that the fact that by the mid 1930's America became one of the largest consumers of coffee (it has been the largest consumer for the last 40 years), the NY coffee futures became dominant to the point that none of the other exchanges kept up.

The London Stock Exchange is often considered the oldest, but actually the Amsterdam one, was probably first. When Europeans rushed to colonise Africa, they bought coffee back to the continent (both Arabica and Robusta where found there originally, Arabica from Ethiopia, and Robusta from the Congo) that had provided it. Between the French and the English more Robusta plantations where set up through out Africa. Since the English controlled the trade routes  they started the Robusta futures market to challenge the Dutch and German Arabica based market. Robusta only really become a dominant player just before the first W.W. London continued to control the price of Arabica's much cheaper cousin. By the way it represents 40%  of the coffee consumed now. Since the Americans have never really taken significant amount of Robusta (European demand is still higher, although extract and instant providers are responsible for the bulk of the purchases on both sides of the Atlantic), the NY exchange never started trading in Robusta futures, and that will probably stay the case.

As a side note, a fact that is often misquoted is that coffee is the second most trade item. This is not true. Coffee Futures are the second most actively traded instrument behind oil, it is actually the 50th most traded item world wide, or there about.
Posted by Warren Machanik at 07:57 No comments:

After our trip to the states, and looking at the dominance of pour over and filter through the visit, we thought we should consider looking at is as an option. 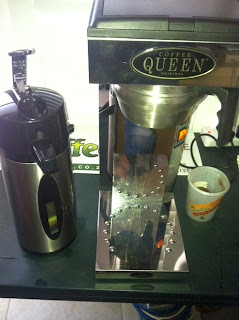 Queen Thermopot
We ordered our Queen Thermo M, and below is a review.

The coffee was a good strength and a classic filter type taste. So we made a full pot.

This time the coffee was a little on the weak side, so I would probably look at reducing to 2litres or add more coffee. Four hours later we tasted again, the coffee was still hot, and tasted good.
We used Quaffee's House Blend, which is relatively mild but it was very drinkable, even after 3 mugs it was a little morish

I would definitely consider this as an option, we will look to offer this soon. The cost of the machine is about R3,000.00 including thermo pot, and I think it should suit most peoples tastes.

This test was done with fresh ground coffee. We repeated the test 2 days later with coffee ground 2 days before and the coffee was about 20-25% of the flavour. So if you want to use a solution like this you need to grind the coffee fresh.
Posted by Warren Machanik at 08:38 No comments:

This month Jura announce which of the new models will be available here in South Africa.

First, the old Ena range has been discontinued. Of the new range only the Ena Micro 9 is going to be made available in South Africa. The good news is the price. It will be under R10,000.00. The bean container takes 15g more than the old one, the tank is the same size, but the machine is slightly smaller than the machine it replaces, shaving off 800m on from the sides and 500mm from the top.

There are also changes with the classic F50, and now they call it the The Jura F50 Classic. The most dramatic change is that the "platinum" panels are gone, replaced with the piano black panels that where on the C5/C9 and Xf50. Otherwise it also has the new Jura grinder, and an updated frother, which we first saw on the J9 and Z7. We have always loved the functionality of the F50, and this latest update we believe will still be a star performer, and it is selling for less than R10,000 now. If you are a serious coffee drinker or an office looking for a solution this should be the first machine you look at.

More a model name change than any thing else the Xs9OT replaces the old Xs90/95 OT. So what's new? Well actually very little, just the model name change and lik all the Jura's a new grinder. One thing that has changed is the price. The Xs9OT will be under the 20k mark. This machine is popular because it has a 5.7 litre tank. We have always been unhappy with the grinder in the old one, but I have not had enough experience with the new one to comment yet.
Jura's new range and prices are available on Quaffee's web site: jura.quaffee.co.za.
Posted by Warren Machanik at 04:18 No comments: